What is Marker Training?

“Marker Training” is a simple way of saying ‘training with a marker signal’. Using a marker signal is a science based teaching method where the marker identifies for the animal when it has made a good choice and lets it know that a reward is coming.  (Reinforcement strengthens behaviour) 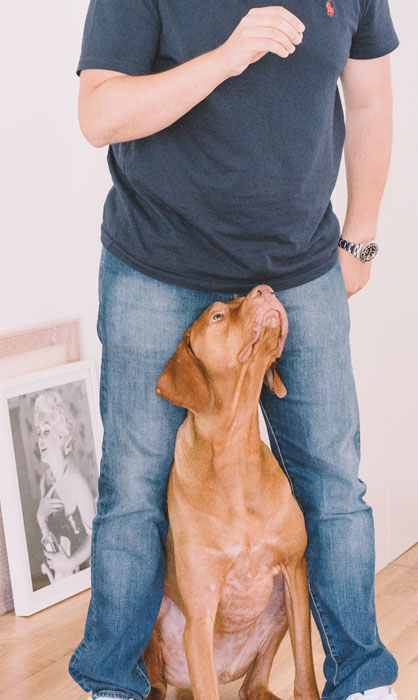 The marker is always followed by something the animal wants—usually a treat or a toy, but could be permission to go visit a person or another animal. The scientific principle of Operant Conditioning states that since the animal was positively reinforced for his behaviour, he is likely to repeat the action. All animals respond to the science of marker training, from the smallest spider to the largest whale. It is a force free method of communicating across species.

A marker can be a noisemaker, a verbal ‘yessssss’ or ‘gooooood’ or a thumbs up.

What kinds of behaviours can be trained with a marker?

Every behaviour that an animal is physically and mentally capable of performing can be trained with a marker….you are probably already using a marker without realizing it.  Jeanne has trained a fish; Glenda has trained her cat; Julia trained her sheep; Karen trained a horse. Other marker trainers routinely train horses, dolphins, bears, sea lions and some train such divergent species as lobsters, spiders, guinea pigs, etc….any animal can be trained (yes even humans–then we call it TAGTeach).

“Marker Training” is about inter-species communication and having fun communicating with the other species and both participants being active in learning.

The primary goal of Love 2 Play Dog Training is to enhance the partnership between dogs and their human families. We will work together so you can learn the skills needed to positively train your dog. We will help you apply the scientific principles to work with your dog on a wide variety of skills.

Marker Trained animals are always ready to learn new behaviors. They come to love the process of learning. They remember behaviours years later because they were ‘aware’ as they learned them, rather than acquiring them without awareness. They develop confidence because they have been successful in the past.

They are enthusiastic because they expect the consequences of their success to be pleasurable.

“I love clicker training because my dog and I are both in the learning game together and we are both getting something out of it. I get to watch my dog learn and understand me like no other dog ever has and that is positive reinforcement for me; my dog gets my attention and is an active participant in his learning and THEN gets positively reinforced for having fun learning….this is a blast!”

Will I have to use a marker forever?

No, absolutely not. You don’t even have to use a ‘clicker’, you can use any consistent, salient sound to ‘mark’ a behaviour. Once a behaviour is on cue (command), you no longer use the marker UNTIL you want to train a NEW behaviour. The marker simply is a clear, common ‘language’ between you and your dog. The marker is ONLY used to teach NEW behaviours.

Do I have to use food forever?

The food is a paycheque. You only use food until the behaviour is a habit. Then use other reinforcers….a reinforcer is anything your dog wants including treats, toys, going outside, cuddling with you, sniffing a tree, etc. Our goal is to have our dogs working for us on or off leash, in or out of the house, and whether or not you have a clicker and a treat. The more you reinforce in the beginning, the stronger the behaviour will be.

Why can’t I just use food or praise? Isn’t that still force free?

Yes it is, but there are a few special things about a marker that make it more effective than just a treat or praise:

The marker acts like a tiny camera in the dog’s mind. It takes of picture of the exact moment he did the right thing. When using other positive training methods, treats and praise are usually delivered after the dog has performed the behaviour making it harder to link the reinforcer with the action in his mind. This is why some people call clicker training ‘precision training’…it is very precise and fast.

When you use a marker signal, your dog will learn desirable behaviour amazingly quickly. The marker provides a consistent, non-emotional marker so your dog always receives the same information. The marker is also distinct from other signals in the environment.

My daughter wants to train the dog, can SHE use the clicker?

Absolutely, anyone can teach with a marker. Dogs trained to pay attention only to a “dominant” voice will often not “listen” to children in the family. With marker training, everyone can play a part in teaching the dog.

MarkerTraining is fun for everyone, including the dog!

Do I always have to provide a treat after I mark?

You have to provide a reinforcer each and every time. The ‘mark’ means the dog has earned something he wants—usually a treat or a toy.

If I don’t use a command, how will my dog know what we are working on?

Your dog is undoubtedly very smart but he is not born knowing your spoken language. In marker training we add the cue (or command) AFTER the dog has learned to do the behaviour. In effect, we give the behaviour a name once the dog is doing it. We add a name to the behavior, so that you can tell the dog WHEN to do the behaviour. This can be a hard concept to get used to but it is extremely effective.

There is so much to know and it is all so new. What if I make mistakes?

The good thing about marker training is that it is a very gentle way of training. If we make mistakes, it may take a little longer to train a behaviour, but that doesn’t matter to our dogs. Our dogs are very forgiving creatures. Even if you make mistakes, you will not cause your dog, or your relationship with your dog, any harm with clicker training..

Can a dog that has been trained “traditionally” learn with a marker?

Absolutely. “Crossover” trainers are often amazed at the change that comes over their dogs when they switch to marker training. Previously hesitant and shy dogs become enthusiastic and creative learners. To try marker training with a dog previously trained with traditional methods, don’t begin with a behavior the dog already knows—try something completely new and fun…preferably a trick.